One of the problems of doing longer rides or trying to use my bike for more taks is carrying stuff. There’s always something to carry, from just a spare innertube and basic tools to enough for a 600km ride across the country to getting everything to work of a morning.

First off, an admission to why I rejected one of the most common solutions. I can’t stand cycling with a rucsac on, it just drives me nuts. And I think the rubbing and the extra weight over a long distance would make it even more unpleasant.

I started off at the beginning of the year with a few small bits stuffed into jersey pockets. Nice and simple, but there was a pretty small limit to what I could carry comfortably so it was never going to work for long distances or commuting

Next I got a normal under seat saddle bag. This was just big enough for tools, tubes, a jacket and a couple of mars bars. If I tried really hard I could get my phone in there as well. So it would work for up to 300km probably, but not on longer audaxes or for commuting.

When looking for something a bit larger I found a number of options, but they didn’t look quite what I wanted. Anything that required a rack to sit on was out as I didn’t have the requisite mounts on my steed (and I didn’t fancy faffing with P-Clips), or couldn’t be removed quickly (I’m not always in the most salubrious parts of Nottingham, so fancied something that was reasonably quick to remove so I could take it with me).

I ended up with a Carradice Barley saddlebag with a Quick Release BagMan support.

The Barley is a simple design that’s been around for years. It’s made of hard wearing Cotton Duck (thick cotton material which is treated with wax for waterproofing). There’s one large compartment which seems to swallow most things:

Here it’s packed up with a normal set of kit for a day at work: 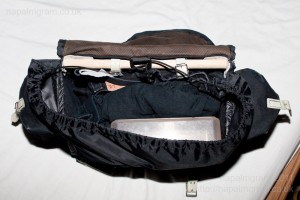 which is this little lot: 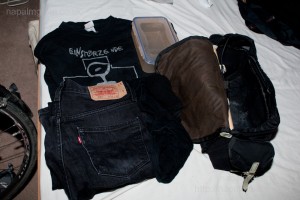 That’s a reasonable size lunchbox, jeans, T-shirt, boxers and socks. Which is enough for work, and theres still some room for other bits and pieces. Though I do leave a pair of shoes at work as they wouldn’t quite fit in (though when I rode down to Luton I managed to fit in a pair of converse hi tops, but they probably wouldn’t do for work)

There’s a bit of sag where the bag sits on the bagman, but that can be avoided with some careful packing or putting something at the bottom. On audaxes I tend to use my spare maps and routesheets for that. And other owners have used thin bits of plastic or cardboard 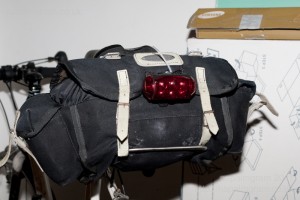 And on the sides there’s 2 pockets of a reasonable size: 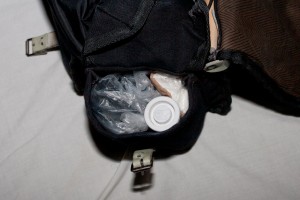 This one’s been filled with 2x 700×25 innertubes, a pack of tissues and a tub of Nunn tablets. The other side holds a couple of multi tools, spare chain links, lock ties and a space blanket. With the side pockets packed like this I never need to empty them, so there’s no worrying about making sure I’ve got everything when I head out on a ride.

On the lid there’s a couple of strong metal loops. I think these were meant to be somewhere to attached your rain cape, but I’ve had good success using them to attach a dry bag on top for extra storage. I normally only use this for something light (thicker jersey and a pair of shorts normally, as shown in the bottom photo). There’s also a handy loop for adding a light, I’ve lock tied mine on for a bit of extra security. Only slight problem with the loop is that if the bag’s not full it bounces quite a bit, which can cause some strange noise as it hits the bagman 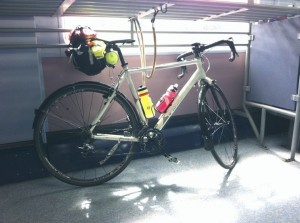 In the great tradition of quality british manufacturing, the name of the bag’s creator is written on the label, mine’s a Priscilla 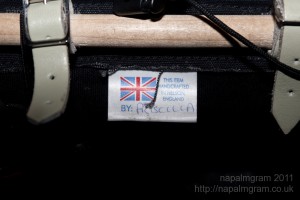 As I don’t have a Brooks saddle (or one of the other with bag loops) I needed something to attach the barley to my saddle with. The Bagman QR does the job nicely. There just one large clamp bolt to do up to fix it onto the saddle rails, and that’s it. The Barley’s hanging loops just clip into the bagmans clips and there’s a stap to secure it to the frame a bit more securely, though I’ve started using a bungee cord for that as it’s easier and quicker with cold hands. The only other change I’ve made is to replace the tiny grub screws with some proper M5 bolts so I can get them properly tight without stripping threads. It’s also a handy attachment point for other items. On longer audaxes I’ve attached my waterproof to it, and also bungeed a spare folding tyre onto it which frees up more room for malt loaf.

After a year of use my Barley is showing signs of character with some shiny patches and some fading. But it’s still very waterproof (tested regularly in the UK), I’ve never seen moisture inside even in the worst of rain. It’s been regularly leant against rough surfaces and doesn’t show any wear. The only slight problem is some stitching fraying on one of the straps, and I’m debating whether to send it back to Carradice for repair or just take it to a Cobblers so I’m not without it for too long.

Size wise it’s been great for most things. Though for some future plans I’ll want something that can take a full change of clothes for a couple of nights away. For just a few nights or long winter rides I think I’d just go for a larger Carradice (Nelson Longflap maybe).

Over the year the only items I’ve regularly wished I could carry on the bike but couldn’t have been my OU books and a laptop. But I don’t think there’s really anything non pannier that would cope with those.